Today is the anniversary of my brother John’s birth. This is a story I tell him about that day every year… and it’s also the story I told about my father at his post-funeral repast.

After four girls, we were all sure that John would be a girl, too. We decided that our new baby would be named Christine Marie. I drew a picture of my baby sister-to-be on the last day of third grade in Mrs. Gumpers’ class at Our Lady of Sorrows.
Every summer, we went to Playschool – the free vacation day camps that the New York City public school system ran in the neighborhood school buildings from early July through the end of August. At the end of the season, there would be a huge gathering of all the schools in the district at Newtown High School’s athletic field, and each school would put on a little musical show. We’d make costumes out of crepe paper, do the Charleston, sing Oklahoma!, things like that. It was great fun, and parents were encouraged to attend and cheer for their offspring.

It was in the high 90s and humid the day of our pageant. My parents attended anyway — my father brought folding beach chairs, and he and my enormously pregnant mother watched and cheered and sweated in the boiling sun as class after class did their song and dance routine. It was over by about half past four. We piled into the car, went home, had dinner.

Mom’s labor pains began, and Dad took her to the hospital at around half past six. Our Yaya (Mom’s mother) was already at our house (probably watching Barbara, who would have been too small to sit still and watch the pageant at Newtown Field).

The phone rang, and Yaya picked up, listened for a minute, and made some uncharacteristically loud sounds. Somehow, Janet and I gathered that we had a brother. We jumped up and down, and ran down the three flights of stairs, yelling. “IT’S A BOY! IT’S A BOY!!”

We took it to the street, running up and down 42nd Avenue, from 99th Street to National Street, the full length of our block, yelling yelling YELLING “IT’S A BOY! IT’S A BOY!!”

The neighbors came out, everybody was out. If it hadn’t been August, it’d have been a Christmas miracle.

Everyone was so happy, so excited that we finally had a brother. When my dad came home, and handed out the first-ever blue cellophane wrapped cigars, the look on his face said everything. I had never before, and never since, seen such a look of pure and absolute joy on his face.

And that was how Christine Marie, now named John Steven, was welcomed to the world. 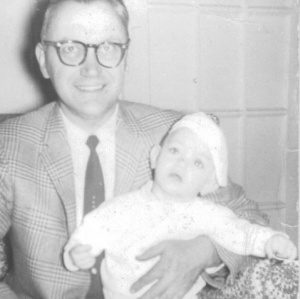 2 thoughts on “From Missing Dad: John Is Born”

This site uses Akismet to reduce spam. Learn how your comment data is processed.

I voted, and, again, it was for naught.

Archives ~ My Back Pages

What We're Talking About